Lindy Johnson’s fascination with how students learn through digital media began in her early teaching days as an English high school teacher in the Boston Public School system. She noticed that the students she taught were passionate about digital media, and she learned that embracing their love of media and bringing it into the classroom led to more meaningful learning.

Her exploration of how digital media affects student learning has made Johnson a recipient of this year’s Plumeri Awards, an accomplishment that recognizes W&M faculty for their teaching and research and provides $20,000 to continue their work. 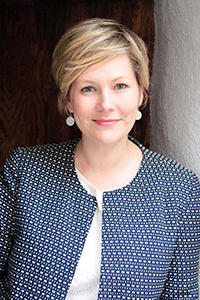 The idea of technology in the classroom has its critics, but Johnson is a proponent of digital learning because of its ability to engage students in unconventional ways. She has explored how Instagram can create awareness of and opposition to anti-immigration policies, how digital storytelling helps bilingual students develop their voices, and how video messaging can spark a conversation between high school students and elected officials about social issues.

As co-director, she dove into a three-year project that brought William & Mary faculty together with public school educators to create a high school experience for students to create their own learning pathways and participate in project-based learning to solve real world problems. The program became known as the Pathways Project, named after its goal in helping students find their way of learning in the 21st century. She was particularly interested in how students in the Pathways Project used digital media for social activism, and she received many accolades for her research in addition to the Plumeri Award, including the Steve Cahir Early Career Award for Research on Writing from the American Educational Research Association (AERA) and the Divergent Award for Excellence in 21st Century Literacies Research.

Social advocacy is at the forefront of all of her research projects and a motivator for her interest in serving on the English Language Arts Teacher Educators Executive Committee, which she was also appointed to this year. Currently at the start of her four-year term, she looks forward to helping change political and social policies in English education.

While she is advocating for students and teachers around the world through her various research and leadership positions, she is also working on several projects that are closer to home. One of those projects brings her to Newport News, where she will work with Professor Meredith Kier, a colleague in the Curriculum & Instruction program at the School of Education, to study how technology can support underrepresented middle school students in engineering. Undergraduate and graduate students at William & Mary will also see more of the professional duo as they will create a new course titled “Game Changers: Exploring Big Ideas in Mathematics and Education through Game Play and Design” with Professor Gexin Yu within W&M’s math department.

“I am deeply honored and incredibly grateful to have my research and teaching recognized by the Plumeri Award,” Johnson said. “The award will allow me to continue to collaborate with local and national communities to design, implement, and research new forms of learning to provide more equitable educational opportunities for young people.”