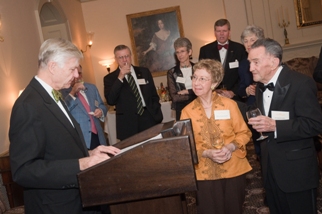 Serendipity has a way of bringing the right people together by circumstance.

Perhaps it was serendipity that brought Armand and Mary Galfo to William & Mary when Armand accepted a teaching position more than 50 years ago.

"We've run into William & Mary students all over the world," said Armand, an emeritus Heritage Professor of Education who taught more than 5,000 students over the years. "Mary and I have led a very serendipitous life."

Throughout the years, both Armand and Mary, a former science teacher, have demonstrated their dedication to the College's School of Education and its students many times over. Most recently, when the Galfos decided to move, the couple gave their past home to the College as a gift. The proceeds from the sale are significantly benefitting School of Education students with research fellowships supported by the Armand J. and Mary Faust Galfo Education Research Fellowship Endowment and the Mary Faust Galfo Science Teaching Scholarship.

"We decided to make this big commitment now rather than leaving it to the College later because we enjoy meeting with the students for whom these funds were created," they said.

The idea to support the School of Education financially took root when Armand was asked by the education dean to teach the School's educational research course. For Armand, a chemistry and mathematics major who holds a doctorate in education, this new appointment would prove not only a career-defining move, but one that would allow him to reshape the way the subject of educational statistics was approached and learned.

"The statistics text books that were available were written to teach students to memorize formulas, and then use those formulas to answer questions," said Armand. "That's no way to teach statistics; you have to learn statistics from a conceptual point of view."

So, with a lack of appropriate text books, Armand wrote his own: Educational Research and Statistics, which he used in the classroom. The book was also used by 20 colleges and universities in the United States and in Canada. That gave Mary and him another idea.

"We thought, why not invest profits from the book in our students?" said Armand, who also authored a second book on the subject, Educational Research Design and Analysis.

Their contributions increased over the years to the point where, by the late 1980s, the Galfos and their son Christopher '73 and daughter-in-law Tina were able to begin funding two annual awards that helped support outstanding education students.

"Outstanding students are drawn to William & Mary," she said. "With just a little help, they can go very far and become the best science teachers."

"Since both Mary and Armand had teaching experience, they clearly understand the importance of having bright, well prepared professionals educating our students," said Virginia L. McLaughlin '71, dean of the School of Education. "Their generous scholarships and awards have helped to place more W&M School of Education graduates in K-12 classrooms and universities and in leadership positions in academic administration."

After formally retiring from the classroom, Armand embarked on several international research projects and Mary helped organize the information he collected. Their research, involving classroom question-and-answer studies with students across Europe, explored the topics of peace, war and the Cold War. The Galfos' initial efforts in England garnered an award from the U.S. Institute of Peace as well as a Fulbright Grant, which allowed them to pursue further research in Germany, Belgium, Hungary and Austria. Armand's rank as a retired Air Force colonel was also helpful in conducting the research among NATO nations.

The Galfos' travels have been accentuated by their serendipitous nature. They have met people all over the world during their travels and maintained those relationships, never knowing for sure when and where their paths would cross again.

Considering the global nature of their encounters, one thing is clear: the Galfos' good works are felt deeply at William & Mary, but they know no bounds.

Dean McLaughlin explains it best: "The Galfos are inspirations to us all."