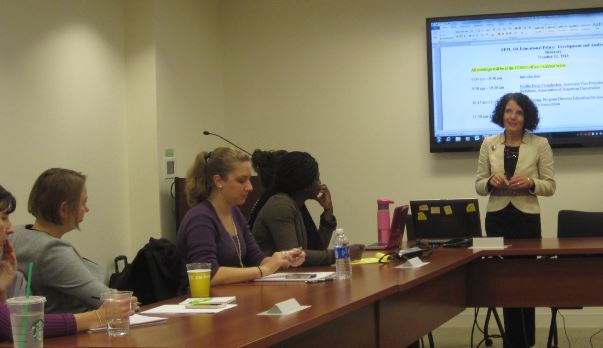 Professor Pamela Eddy and her students in EPPL 601, Educational Policy: Development and Analysis class, traveled to Washington, DC on October 11 to meet with policymakers.  All meetings were held at the Council for the Chief State System Officers (CCSSO) office in Washington, DC.

Their first meeting was with Mollie Benz Flounlacker, Associate Vice President for Federal Relations, Association of American Universities.  Flounlacker is a 1997 graduate of William and Mary and related her career pathway to her current position at AAU.   She also reviewed the work she does lobbying for research initiative funding on college campuses and in lobbying for student access. In addition, she highlighted concerns over the “innovation deficit” that may occur if funding is decreased for research on campuses.

The next speaker was Ryan Reyna, Program Director Education Division, National Governor’s Association who spoke about the focus of states on education issues and the need for an educated workforce. Kim Edwards, first year PhD student, reflected on Reyna’s presentation and noted how she appreciated his listing of the “P’s in a Governor’s Toolbox.  This listing included:  Purse; Party; People; Pulpit; Priority; Policy; Performance monitoring; and Politics. Reyna forewarned of bad press coming for K-12 schools as new measures of proficiencies are rolled out and emphasized the focus of the NGA on an integrated educational pipeline aimed at preparing more students for success.

The group next met Peter Eckel, VP of Programs and Research, Association of Governing Boards of Universities and Colleges who reviewed the role of governance on college campuses and underscored the issues emerging when boards and presidents have differences.  He reviewed board and president conflicts and how votes of no-confidence are currently in the news, reviewing the case at the University of Virginia with the ouster of President Sullivan, and her subsequent reinstatement in 2012.  Margaret Reed Millar, Director of Membership and Outreach, Council of Chief State School Officers (State Policies) was

the next speaker.  Millar’s organization hosted the group meetings for the day.  She spoke about the Common Core State Standards and the role states have taken in establishing this work.  Debbie Grosser, co-director of the Training & Technical Assistant Center in the School of Education and current doctoral student, commented, “The most interesting part of the day was Margaret Millar from CSSO sharing information related to Common Core and institutional change needed for educational improvements.  It is reassuring to know that this group addresses professional development and issues related to educational innovations that support the idea that all students are entitled to a high quality education.  It was a valuable experience that put a current, real-life perspective on what we've been discussing and reading in class.”

Vic Johnson, Senior Advisor, Public Policy, NAFSA spoke next about his work in advocating for ease of access to higher education opportunities for international students and the role of study abroad for college students.  He noted that William and Mary is a leader in the country with the number of students participating in study abroad.  Several international students were a part of the class audience and were able to engage in conversations regarding education in their home countries.   A meeting with Wayne Wheeler, Manager of Global Initiatives and Outreach, and Jim Hermes, AVP for Legislative Affairs, American Association of Community Colleges (AACC) wrapped up the meetings.  Wheeler reviewed the international initiatives underway in community colleges, which include recruitment of international students and use of the uniquely UW community college model abroad.  Hermes discussed the advocacy of the AACC for Pell grants to help fund student access to higher education and the creation of the Voluntary Framework for Accountability by the association.  A recent 21st Century Commission Report on the Future of Community Colleges outlines seven objectives that the association seeks to meet.

According to Natalie Dudnytska, doctoral student in gifted education, “I think that what added greatly to our experience was that all speakers represented different spheres of education and held different positions. It was interesting to look at issues in education policy through their eyes and hear them speak about what is pertinent to them and the way they approach problematic issues.”

Shelly Cihak, Assistant Principal at Warhill High School and current doctoral student, commented, “I looked back at my reflections from last Friday and I think one of my biggest take-aways is that K-12 and higher education are very much on parallel courses in terms of the federal roles in accountability and policy development. Surprisingly (to me), the two areas have not joined together for advocacy and I see one of the benefits of having these conversations at W&M is that we have the opportunity to work with our peers in both K-12 and higher Ed to benefit the education field as a whole.” 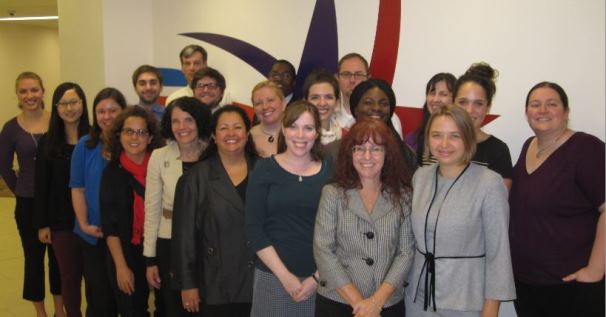