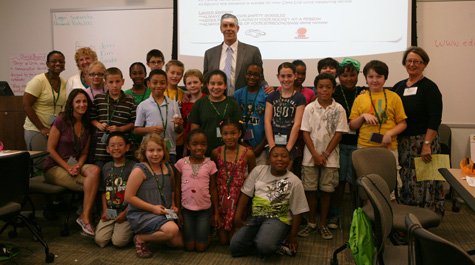 On the afternoon of July 13, the safety goggles came off and young hands were raised inside a VISTA class being held at the College of William & Mary's School of Education.

That's when United States Secretary of Education Arne Duncan dropped in to see what some of the 42 teachers and 52 elementary school students involved in the 2012 two-week VISTA camp were up to. Duncan was on his way to a panel discussion with representatives from all components of the Virginia university system when he made his unscheduled appearance.

Duncan heard about the 2012 program's overall theme of "Space Exploration." Students explained that they were making (paper) rockets and learning what it's like to be an astronaut -- how and what they eat, what they do for fun, exactly how weightless they are while inside a space capsule.

"You're having a lot more fun than I do in my meetings," Duncan told the students. "I'm thrilled to be here."

VISTA – Virginia Initiative for Science Teaching and Achievement – is in its second year. William & Mary is teaming with school districts, the Virginia Department of Education and five state universities – George Mason, University of Virginia, Virginia Commonwealth, Virginia Tech and James Madison University – on the program whose goal is to improve science teaching and student learning throughout the Commonwealth, especially in high-need schools.

The College received a $5.1 million grant from the U.S. Department of Education to lead Tidewater-area activities. The teachers involved with this summer's program have devised two science scenarios for their students.

One involves a call for assistance from President Barack Obama in accessing resources in space, in response to a shortage of rare earth minerals for manufacturing technologies such as cell phones and Xboxes.

Students work on the premise that if they don't find a solution by 2020, all Americans 16 years and younger will have to give up their electronics.

The other scenario involves a request for assistance from NASA, which needs VISTA campers to provide expert technical assistance to the producers of the next "Men in Black" sequel.

Juanita Jo Matkins, associate professor of science education at the College and co-principal investigator, is in charge of the William & Mary components of VISTA, serving as liaison with school divisions in Tidewater, and coordinating with other VISTA sites in Virginia.

Duncan, Harvard-educated and former chief executive officer of Chicago Public Schools, posed for a group photo with the class before heading off to the panel discussion, though not before thanking them for all of their hard work.