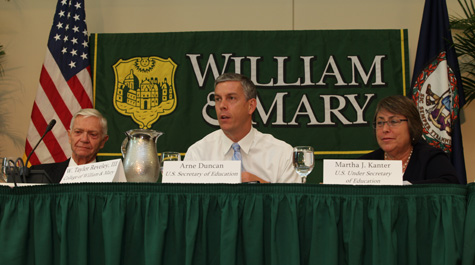 The United States needs to once again lead the world in college graduation rates, and keeping higher education affordable is key to that happening, U.S. Secretary of Education Arne Duncan told a crowd of nearly 300 faculty, staff, students and community members at the William & Mary School of Education on Friday.

"I'm just convinced we're not going to have a strong country or a strong economy if we don't again lead the world in college graduation rates," Duncan said, adding that the country is currently 16th in the world.

"It is vitally important that higher education stay affordable for those who want it," said Reveley, adding that need-based aid is key to making it so.

The William & Mary president went on to say that face-to-face higher education will continue to be an expensive endeavor. However, colleges must do their part by doing a better job of controlling costs through productivity and innovation. Additionally, public institutions like William & Mary must create new financial models because they can no longer rely on adequate funding from the state.

"If we are to preserve wonderful state systems of public higher education, this will require, in my judgment, getting real about what effective higher education costs, looking with an equally realistic eye at how much taxpayer support is likely to be available,  and agreeing to channel the taxpayer support that is available disproportionately to the schools with the least capacity to fend for themselves financially while allowing those schools with the greatest capacity to fend for themselves to have the freedom to sustain themselves through robust public/private partnerships," said Reveley.

Duncan said that, throughout the country, going to college is no longer seen as an option for many people because of its cost.

"We think everybody who works hard should have an opportunity to go to higher education," he said. "That's where the jobs of the future are going to be."

In order to make that a reality, the federal government is going to have to continue investing in higher education, Duncan said. However, states and institutions of higher learning also must play a role.

"This is about shared responsibility," he said. "This is about all of us stepping up and trying to be part of the solution. Again, we're not just fighting for education, I think we're really fighting for our country. If we continue to be 16th in the world or drop, I worry a lot about how strong we'll be economically. If we become first in the world in college graduation rates, I think we'll be in great, great shape."

Kanter echoed Duncan's sentiments, saying that she wanted the top 100 percent of Americans interested in higher education to have the opportunity to fulfill that dream.

"We've got to do better as a nation. The good news is you see colleges and universities up here from all sectors," Kanter said, noting the mix of representatives from public, private, four-year and two-year institutions on the panel. "You see all of these colleges and universities really working on increasing productivity, using every leverage and innovation that they possibly can to get more and more students persisting and graduating."

The panelists brought a variety of topics to the attention of Kanter and Duncan, including transfer agreement programs, partnerships with the private sector, engaged citizenship, the achievement gap and a database to centralize student information. Audience members also had a chance to ask questions, which centered on topics ranging from the Free Application for Federal Student Aid (FAFSA) to corporate pressures at universities.

"Obviously, we're speaking about issues that truly matter fundamentally to each of us and to the country," said Reveley as he closed the event. "While I don't think there are any easy answers – and sometimes, even any obvious answers – I do think there are answers."

The more that those in higher education can focus on "the world as it actually is," the more likely they will be able to come up with real solutions to problems, the College president said.

"It's so crucial to just figure out one or two things to do in real time, get 'em done," said Reveley. "That will build self-confidence and morale and momentum, and we can move on to something else."