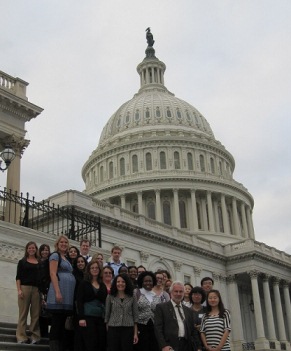 On October 26, 2012, students in EPPL 601, Educational Policy: Development and Analysis class, and Professor Pamela Eddy, traveled to Washington, DC to meet with policymakers in venues where policymaking happens.  Their day began with a visit to the William & Mary, Washington D.C. office where they met with Chris Mullin, Program Director for Policy Analysis, American Association of Community Colleges (AACC).  Dr. Mullin gave an overview of his role at the AACC as a policy analyst and guided the students in the process of effective policy analysis and advocacy.  The next speaker was Margaret Reed Millar, Senior Program Associate, Council of Chief State School Officers (Common Core Standards) who spoke about the Common Core Standards highlighting how they are the minimum expectation, "It's a floor not a ceiling," she reflected.

Following lunch, William & Mary alumnae Cristin Toutsi, Senior Program Specialist and Interim Director of AGB Consulting Services, Association of Governing Boards of Universities and Colleges; and Christen Cullum Hairston, Senior Research Analyst, Institute of Higher Education Policy (IHEP) spoke to the group about their own experiences in Washington D.C. and advised students about how they can be effective participants in the policymaking process. They offered advice to the class on how they have put their William and Mary courses to practice in their professional positions and provided background on their career paths.  Both had participated in a class trip to Washington DC during their program and made initial job connections through this experience. 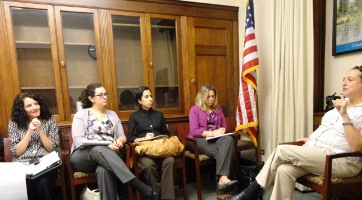 According to Paige Hendricks, doctoral student in Gifted Education, "Our trip to Washington, DC provided a unique blend of theory and practice.  As students of educational policy, we were able to speak directly with leaders and policy makers about the current Common Core State Standards  and the P-16 community college readiness initiatives.  Through this trip, I believe we all learned that individual voices matter in the policy process and that each of us (in the class) have an important role to play in shaping the future of educational policy in this country and all over the world."  Over the term, students in the class worked on an advocacy project in which they chose an issue of concern for them that they then advocated for a change in policy with an appropriate level policy maker.  This assignment provided them a 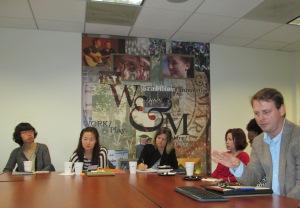 platform to realize how their voice as educational actors influences the policy process.

The group then made its way to the Department of Education to meet with the staff of Carmel Martin, Assistant Secretary for Planning, Evaluation and Policy Development where they were briefed about the workings of the Department of Education.  A visit with the staff of Representative Scott followed during which students had a detailed meeting with Legislative Director Ilana Brunner who highlighted policy issues that need attention and the shift in the paradigm from reactive to proactive policy making.  The final meeting of the day was with another William & Mary alumna Kelly Hastings, Legislative Director for Congressman Lou Barletta, who discussed policy matters related to financial aid and funding of education.

Richard Hodges, doctoral student and Director of Learning Resources at Thomas Nelson Community, reflected, "The Washington trip was the highlight of the semester! It was great to get the real 'behind the scenes' look at how policy is created on the national level."