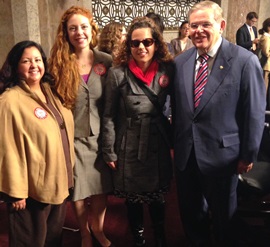 Doctoral students Diana Hernandez and Rachel McDonald, along with Professor Jacqueline Rodriguez, attended a packed senate hearing on the Convention on the Rights of Persons with Disabilities treaty (CRPD) on Thursday, November 21st.  The CRPD is a global non-discrimination treaty based on the framework of the Americans with Disabilities Act (ADA), ratified by approximately 130 countries across the globe.  Its stated mission is to empower individuals with disabilities to achieve economic self-sufficiency, independent living, inclusion and integration into all aspects of society.  Disability advocates and other supporters of the treaty believe that the CRPD is important to all people with disabilities, including veterans and service members, as it promotes equal treatment and non-discrimination in access to rehabilitation, employment and educational opportunities.  After missing a majority vote on ratifying the treaty by five votes last year, current bipartisan efforts have strengthened from leaders such as former Senator Minority leader Bob Dole, Senator John McCain, Secretary John Kerry, and Foreign Relations Chairman Senator Robert Menendez. In addition, the CRPD has received support from over 700 diverse organizations including Coca-Cola, Microsoft, The Red Cross and NASCAR.

As part of an advocacy project for their Education Policy course, Diana Hernandez and Rachel McDonald spent several weeks prior to the hearing working to advocate for the ratification of the Convention on the Rights of Persons with Disabilities by urging colleagues and other community members to sign the CRPD petition, writing letters to and calling their state senators, and using social media to communicate support for the treaty. In the second hearing in a month-attended by McDonald, Hernandez and Rodriguez- Secretary of State John Kerry addressed concerns regarding the treaties effect on domestic law and home schooling stating- “This treaty is not about changing America,” Kerry told the committee. “This treaty is about America changing the world…. there are countries where children with disabilities are warehoused from birth, denied even birth certificates, treated as second class citizens every day of their lives…moments like this clarify for me the work we must do to export our gold standard – the American standard. I hate seeing us squander our credibility on this issue around the world.” Other panel members included C. Boyden Gray, attorney and former U.S. Ambassador to the European Union and Frances W. West, and Worldwide Director of IBM's Human Ability and Accessibility Center, who addressed the economic benefits of the United States becoming a world leader in developing accessibility technologies

Diana Hernandez commented on the experience of attending the hearing.   “No longer were Rachel and I just reading our textbook.  By advocating at a grassroots level and attending the hearing, we were experiencing the political process described within it.  Our instructor, Dr. Pamela Eddy, not only expands our thinking, but challenges us to take action on issues that matter most to us”. Dr. Jackie Rodriguez stated that “Participating in the Senate Foreign Relations Committee Hearing was a thrilling experience. I was impressed by the Committee Member's level of knowledge regarding the Convention and their understanding of the relationship between the UNCRPD and our seminal US Law, Americans with Disabilities Act (ADA). Advocating on behalf of ratification was Secretary of State John Kerry, who reiterated to the Committee that our current US Law, the ADA, already espoused the Convention’s key points. The committee universally agreed that their responsibility was to advocate on behalf of people with disabilities in the US and around the globe. Hopefully, the Committee will act as advocates and vote to ratify the Convention in the near future.”

CPRD advocates continue to urge the Senate to pass the treaty before they recess on December 20th. Click here for more information on how to advocate for the CRPD treaty.