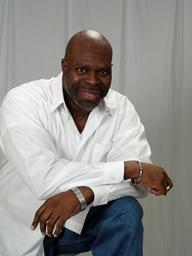 Dr. Kent Butler's higher education career began at the University of Connecticut.  He studied communications with the goal of working as a television anchor.  After a short stint at a local television station, Dr. Butler decided it was not his ideal job after all, so he pursued other work and was hired at UCONN.  "My life became UCONN," he says.  He held a few positions outside Connecticut at various times, but he continuously returned to his alma mater, where he later earned a master's degree and Ph.D.   In October he and his family attended an awards ceremony at UCONN, where he received the "Outstanding Alumni Award," recognizing alumni who have achieved notable success after graduation.  He has just ended a one-year appointment as president of the Association for Multicultural Counseling and Development (AMCD), a division of the American Counseling Association.

Here at the School of Education, Dr. Butler is working in the SPACE program, currently teaching an Ethics course and Techniques of Counseling.  He especially enjoys courses like the latter, in which students are taking part in experiential learning.  "I love being in the classroom, "says Dr. Butler. "Watching students develop and grow has always been a fun part of teaching."

Dr. Butler's research spans a variety of subjects, but he focuses mainly on multicultural issues and counseling.  The bulk of his research centers on African American males.  His dissertation at UCONN was titled The effect of an Upward Bound Program on the self-concept of adolescent African American males.  Recently, Dr. Butler had a book published.  The book, Attaining an Academic Appointment, is intended to help PhD students navigate the job-search process after graduating.  He is now focusing on the textbook market, hoping to lend his experience to texts on multicultural counseling.

In his personal life, Dr. Butler loves watching UCONN Huskies basketball and attending their events.  He misses the days when he knew the players personally and would see them around campus.  Though he is not as connected now, he still faithfully follows the teams.  He also enjoys spending time at home with his wife, stepson, and baby daughter.