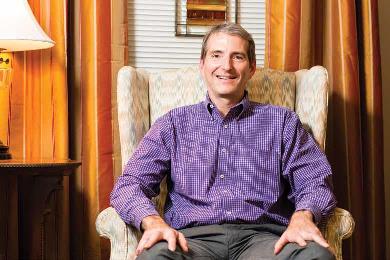 “I hiked the Camino de Santiago in Spain this summer,” Dr. Johnston (John) Brendel says. “One of the reasons I did that was to confront some of my own fears. I came back with a renewed appreciation of fear and anxiety and how that plays out in my clients’ lives. I’m in a new phase of filtering that into my professional work.”

John spent over a month with two friends walking the Way of Saint James – the pilgrimage to the Cathedral of Santiago de Compostela. “We struck out from France, in the snow, on a day in April and continued to walk forthe next five weeks. I’m a homebody, a small town person. Here I was in a foreign country where I don’t speak the language; I’m carrying everything I’ll need for the next five weeks on my back and trusting that the yellow painted arrows along the Way will lead to the destination.”

Anxiety from being out of a normal routine can be a major factor for people during the holidays, just as it is for a Williamsburg “homebody” like John during his walk across Spain. John is a full-time faculty member in Counseling at the College of William and Mary’s School of Education. He also has a part-time private counseling practice, Blue Sky Center for Counseling.

“One of the strategies to minimize anxiety is to manage your environment. By having your environment in a certain way allows you to relax,” John explains. “During the holidays, routines go out the window. Sleep gets interrupted. Diets get interrupted. There are more social events. Kids are out of school.”

John explains that the clinical definitions of anxiety can vary. “Anxiety comes in a number of flavors like: panic, obsessive/compulsive disorder, generalized anxiety disorder, phobias,” he lists. “The way a person knows they have anxiety to a level that it needs treatment is when it becomes intrusive in their life. It is a fear-based disorder with very primitive underpinnings – back to the fight or flight instincts.”

The good news is that it’s very treatable. “We live in a time when there are a lot of good  treatments.” John prefers to avoid medications for his clients when possible. “A lot of anxiety can be treated with basic lifestyle changes, starting with the way a person thinks. Although the research is clear that in the moderate to severe anxiety, the best combination may be anti-anxiety meds with talk therapy. Sometimes the anxiety is so severe that the person cannot slow down enough to analyze what is happening.”

Anxiety almost always has a thought that triggers it. “People dealing with anxiety are often creative and imaginative. They become good at terrorizing themselves with their own thoughts. Part of counseling people with anxiety is to deconstruct that narrative, break down those thoughts, look for distorted patterns of thinking and then reconstruct those into a more healthy light.” Harboring the “what if…” scenario pervades many thoughts that lead down a spiraling path to anxiety. “That is sometimes called ‘awfulizing.’ People will go to the very worst thing they can imagine, even though the chances of that happening are tiny.”

Look for changes as symptoms of anxiety. John lists changes in sleep, appetite and/or levels of irritability and worry.

“Anxiety can also have physical symptoms like muscle soreness. People often walk around their shoulders tight, their jaws clinched. It becomes confusing for people because they wonder if they have a physical malady.” Anxiety is a mental disorder with physical symptoms accompanying it. With the physical symptoms, anxiety becomes more frightening. “If my heart beat is racing all the time, do I have a heart condition? Am I having a heart attack?” John asks. “Many people on their first panic attack will end up in the emergency room because they feel like they are having a heart attack. The other classic reaction is that they are ‘going crazy.’ After they get the once over at the emergency room, they come away very frustrated because the doctor says there is nothing physically wrong. Yet, they know their heart is beating fast, they’re sweating profusely, and they’re seeing colors in their vision. It’s not a physical ailment, but a mental one.”

Even with all the social advances, there remains a stigma about mental health. “Some people have shame seeking help for anxiety because there is an internal storyline that says: ‘I should be strong enough to do this on my own.’ This is especially true for men in our society. From what we’ve learned about anxiety in recent years, especially in how the brain works, we can see the scientific basis of this in the neurons and their connections,” John describes. “We can work with that. It is not that someone is weak and can’t handle their problems. It’s just that at this particular point in their life, the stress and anxiety are greater than their capacity for handling whatever is going on.”

Counseling helps manage the anxiety. “Medication is a last resort,” John says. “The first thing I look for is: are you putting anything into your system that can cause the anxiety? There’s a  slogan in the anxiety community: No C.A.T.S. (Caffeine, Alcohol, Tobacco and Sugar). We know those four products, for people wired for anxiety, can exacerbate the anxiety.

C.A.T.S. are categories that are relatively easy to identify and work on. The next step is to analyze the stressors. “What are the sources of stress? What is being done for stress relief? We have to target both of those. Is stress coming from the job, children, parents, holidays, etc.? What are you doing for it? Activities like exercise, meditation or something to quiet the mind helps alleviate the anxiety.” It is unrealistic for most people, John explains, that anxiety goes away completely.

“You don’t eliminate it; it’s learning to manage it. There will be peaks and valleys of anxiety across a person’s lifetime. Look for the things that trigger it and for the signs it is coming on. When it starts, let’s try to deescalate it at that point. If it does escalate then we have to deconstruct it. What is the progression of thoughts? What is the self-talk that goes on in their head? I help people deconstruct that thinking.”

John has been at William and Mary since 2005 when he returned to Williamsburg to be closer to his parents. “I grew up in Williamsburg. I’m a product of Walsingham and Lafayette High School,” he says. “I went to Virginia Tech for my undergraduate degree in mass communications and then came back to Williamsburg.” He started studying counseling in his late 20s when he enrolled at VCU to earn his master’s degree.

“I had kicked around a number of different careers in my twenties. I had worked for the Virginia Gazette, performed a number of jobs in the Colonial Williamsburg taverns, really a variety of different things in Williamsburg. I hadn’t felt like I’d found my calling. I went to the career counseling center at William and Mary to take a career inventory. A few areas came up for me: lawyer, funeral director and counselor. Apparently they have similar career profiles. My father was a lawyer and he advised against that. Undertaking didn’t appeal to me. I decided to take a look at counseling.”

The first night after starting the counseling graduate program at VCU, John knew it was the right fit. “It took my previous interest in communications and expanded it in a different way, into a helping field.  Counseling was my niche.”

He began school counseling, as the first part of his counseling career. “I earned my doctorate from William and Mary. Then I spent nine years on the faculty of Texas A&M in Corpus Christi, before returning to Williamsburg.”

Following the painted yellow arrows that mark the Camino de Santiago trail, Dr. Johnston Brendel walked across Spain. “It’s a mind-boggling concept,” he says with a laugh. “You sleep in albergues (hostels) with up to 300 people in a room – once again, not my thing. Five weeks… It’s a real test of physical endurance. I trained walking up and down Jamestown Road with my dog. That was nothing in preparation for the Pyrenees. It was a once in a lifetime sort of adventure.” A challenge and exploration that showed John a way to deal with fear and anxiety that comes from a disruption of our comfortable life routines.